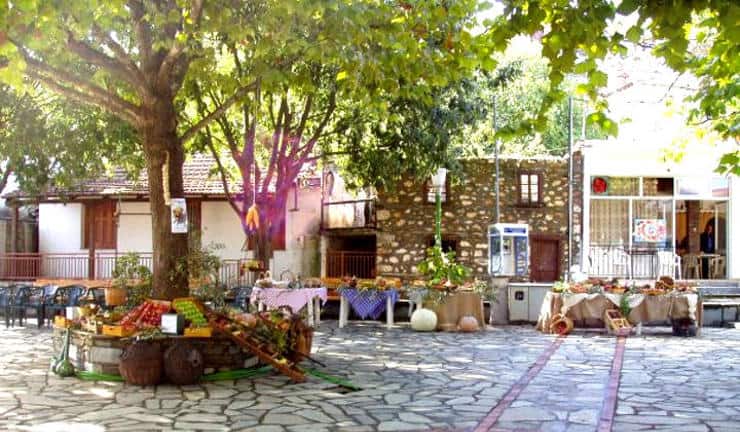 The village’s name refers to a place where in the past you ascetic monks. The researchers place the site of the ancient Melivia close to Polydendri or the Skiti. NW. the Skiti’s identified castle, probably identified with the Byzantine “Kentafropoli».

The hermitage is built to Maurovouni slopes at an altitude of 350 meters. The distance from Larissa is 48 km. The permanent population is 400 people and in summer exceeds 1000. The main income of the inhabitants is olive cultivation, chestnut, apple and pear, farming, fishing and tourism rooms, hotel and camping center).

Near the village in 3 km. we find the source of “Bourboulithra”, amidst lush vegetation with trees and south of the ancient Melivia known the ruins of walls identified by Philoctetes in which Homer refers. The forest of Maurovouni dominated many species of trees and animals, has joined the European network NATURA 2000. Other points with panoramic views is the “Castle” 2 km. far away from the village and the site “Flag”. In lies one of the monasteries of the “terms of Kellion”, the Ag. Anargyroi, with their two hermitages. Worth a visit Notre Polydendri, in the forest with huge oak tree next to the church. Also near the village is Lake of Skiti wrapped the hills of chestnut and walnut trees, which held Canoe.