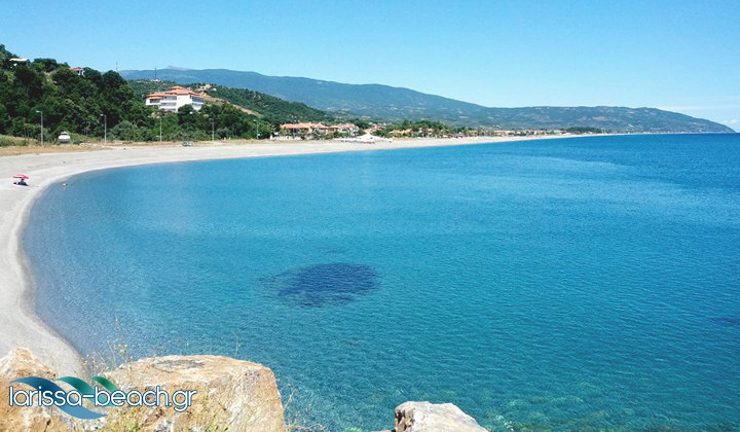 The coastal settlement Agiokampos Larissa is an extension of the mountain village Skiti. Agiokampos is far away 14 km. from the Agia and 51 km. From Larissa. Inhabited 1930 3-4 families, who lived half time here and the rest of the Skiti.

Since 1990 it inhabited by residents, about 300 in summer surpass 10,000 by increasing tourism. The area cross the streams “Puri” and “Bubble,” which is poured on the beach Agiokampos. Remnants of earlier times are the castle, overlooking the harbor, the “steps of Xerxes” and the arched bridge which is made during the Turkish occupation

Today Agiokambos has great construction development as well as infrastructure development, as are the thousands of vacationers and tourists who spend their summers here. Two major projects have been is the port of Agiokampos, which is expected to link the region a hydrofoil from Thessaloniki and Halkidiki and the suspension bridge at “Platanorema” the road connecting Agiokampos in Velika.

The beach Agiokampos is sandy and pebble, crystal clear waters and awarded with the Blue Flag. The stretch of beach Agiokampos with beach Velika and Sotiritsa reaches 14 km. and are the most popular beaches of Larissa Prefecture. The constantly growing businesses, the rooms and hotels , vibrant nightlife and beautiful forests combined with the important monuments in the area, make Agiokampos a modern tourist resort. Here guests can find everything to enjoy their holiday. Notably in Agiokampo two camping with all amenities and entertainment area for children. There are also basketball and tennis courts across the beach from Agiokampo to Velika.

On the beach of Agiokampos, the Prefecture of Larissa, organizing concerts with well-known singers. Also, the beach bars organize all-day beach parties with DJ’s, drinks and wild fun at the beach.