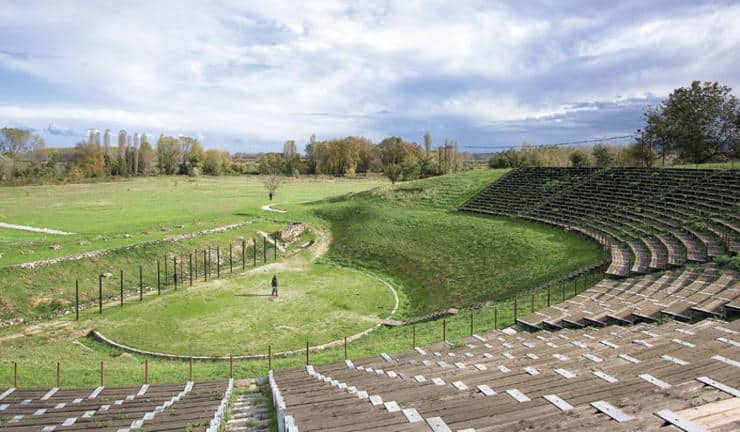 Dion or Dio is a village and a former municipality in the Pieria regional unit, Greece. Since the 2011 local government reform, it is part of the municipality Dio-Olympos, of which it is a municipal unit. It is best known for its archaeological site and the Archaeological Museum of Dion. Zeus was honored at the ancient city of Dion located at the foot of Mount Olympus. It is located 15 km. SW of Katerini, 425 km to the north of Athens and 65 km to the north of Larissa.

The village owes its name to the important sanctuary dedicated to Zeus (Dios, “of Zeus”), leader of the gods who dwelt on Mount Olympus; as recorded by Hesiod’s Catalogue of Women, Thyia, daughter of Deucalion, bore Zeus two sons, Magnes and Makednos, eponym of Macedonians, who dwelt in Pieria at the foot of Mount Olympus.[3] The ruins of the ancient city lie within the modern city’s boundaries.

Dion was the “sacred place” of the Ancient Macedonians. From very ancient times, a large altar had been set up for the worship of Olympian Zeus and his daughters, the Muses, in a unique environment characterized by rich vegetation, towering trees, countless springs and a navigable river. In the 5th century BC, when the Macedonian state acquired great power and emerged onto the stage of history, brilliant athletic and theatrical contests, the “Olympian Games of Dion”, were organized there. Their organization was overseen by the Macedonian kings themselves, who used the sanctuary of Zeus as a religious center for all Macedonians. A city was built adjacent to the sacred sites that acquired monumental form during the reigns of Alexander the Great’s successors, and which experienced its second heyday during the reigns of 2nd- and 3rd-century AD Roman emperors who were fond of Alexander the Great. Dion’s final important period was in the 4th and 5th centuries AD. It became extinct following major earthquake destructions.

The first mention of Dion in history comes from Thucydides, who reports that it was the first city reached by the Spartan general Brasidas after crossing from Thessaly into Macedon on his way through the realm of his ally Perdiccas II during his expedition against the Athenian colonies of Thrace in 424 BC. According to Diodorus Siculus, it was Archelaus I who, at the end of the 5th century BC, gave the city and its sanctuary their subsequent importance by instituting a nine-day festival that included athletic and dramatic competitions in honor of Zeus and the Muses.

The site of ancient Dion was first identified by the English traveler William Martin Leake on December 2, 1806, in the ruins adjoining the village of Malathria. He published his discovery in the third volume of his Travels in Northern Greece in 1835. Leon Heuzey visited the site during his famous Macedonian archaeological mission of 1855 and again in 1861. Later, the epigraphist G. Oikonomos published the first series of inscriptions. Nevertheless, systematic archaeological exploration did not begin until 1928. From then until 1931, G. Sotiriadis carried out a series of surveys, uncovering a 4th-century BC Macedonian tomb and an early Christian basilica. Excavations were not resumed until 1960 under the direction of G. Bakalakis in the area of the theatre and the wall. Since 1973, Professor D. Pandermalis of the Aristotle University of Thessaloniki has conducted archaeological research in the city.

Dion is the site of a large temple dedicated to Zeus, as well as a series of temples to Demeter and to Isis (the Egyptian goddess was a favorite of Alexander). Alexander assembled his armies in Dion before beginning his eastward wars of conquest.

The museum was established in 1983 to display excavations unearthed in the area from a fortified city that once stood in its place from the 6th century BC to the 5th century AD. The artifacts of the museum were also discovered in Olympus and the wider Pieria regional unit.

Excavation of the archaeological site began in 1973 and is still far from complete. The museum contains many items from when the Romans lived in the area, including statues, architectural members, votive and grave monuments, coins, and many other objects found in the necropolis and the sanctuaries and baths of the ancient city on site. The water organ, the Statue of Dionysos, Isis and Aphrodite Hypolympia and the Asklepios Daughters are displays of particular note.

We use cookies to ensure that we give you the best experience on our website. If you continue to use this site we will assume that you are happy with it.Ok