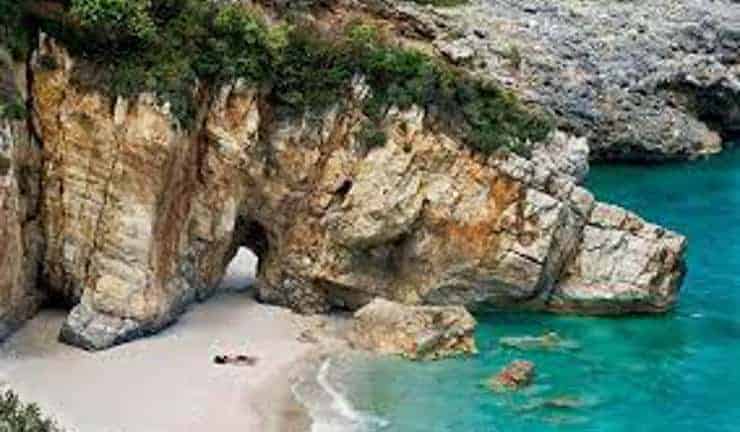 Pelion or Pelium is a mountain at the southeastern part of Thessaly in central Greece, forming a hook-like peninsula between the Pagasetic Gulf and the
Aegean Sea. Its highest summit, Pourianos Stavros, is 1,610 metres (5,280 ft) amsl.[1] The Greek National Road 38 (GR-38) runs through the southern
portion of the peninsula and GR-38A runs through the middle. 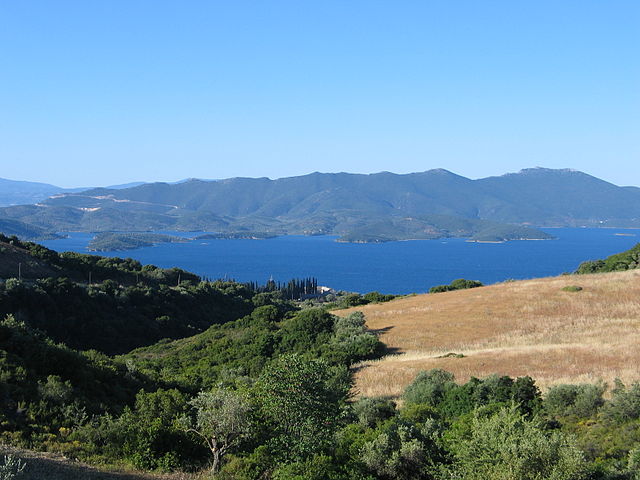 The mountain is thickly forested, with both deciduous and perennial forests, mainly of beech, oak, maple and chestnut trees, with plane tree groves
surrounding places with water. Pelion is considered one of the most beautiful mountains in Greece and is a popular tourist attraction throughout the
year: hiking trails and stone paths give access to springs, coves and numerous beaches, sandy or pebbly, set among lusciously green slopes. Pelion is
an amply watered mountain with an abundance of springs, gorges, streams and rivulets; many streams are routed in carved-stone artificial beds to bring
water to the villages and their thriving orchards. The higher elevations of the mountain receive enough snowfall so as to host skiing facilities that
operate from Christmas to Easter.

Pelian cuisine specializes in charcuterie, its most famed dish being spentzofai, a hearty stew made of sliced pork sausage that is first cooked on
its own, then stewed with green and red peppers, mild or hot as the case may be, and shallots or small onions; eggplant or tomatoes are added when
seasonally available. Pelion is also renowned for its orchard fruit, with pride of place going to the firiki, an originally Egyptian apple varietal
of very small, oval-shaped, intensely fragrant, crisp and slightly tart apples that withstand long storage without refrigeration. There is also wide
cultivation of plums, especially mirabelles and greengages.

In Greek mythology, Mount Pelion (which took its name from the mythical king Peleus, father of Achilles) was the homeland of Chiron the Centaur,
tutor of many ancient Greek heroes, such as Jason, Achilles, Theseus and Heracles. It was in Mount Pelion, near Chiron’s cave, that the marriage of
Thetis and Peleus took place. The uninvited goddess Eris, to take revenge for having been kept outside the party, brought a golden apple with the
inscription “To the Fairest”. The dispute that then arose between the goddesses Hera, Aphrodite and Athena resulted in events leading to the Trojan
War. When the twins Otus and Ephialtes attempted to storm Olympus, they piled Mount Pelion upon Mount Ossa (Kissavos).

The Pelion railway, dating back to 1892–1903, was the first serious public investment in the area. Electricity, radio and automobiles were first
introduced in the 1950s except for Volos, which had those utilities from earlier times. Television arrived in the 1970s and the 1980s and computers
and Internet in the late 1990s. The northern part of the Pelion mountains was struck by a forest fire (see Summer 2007 Wildfires in Greece) on
Wednesday, June 26, 2007, which started in Siki and damaged its forests, mostly at the middle part of the mountain. The fire lasted for several days
and stopped on July 1. Several villages were damaged. As of late August, however, a natural rebirth of the forest was already being noticed, with
several trees gradually turning green again, as well as bushes appearing on the ground.