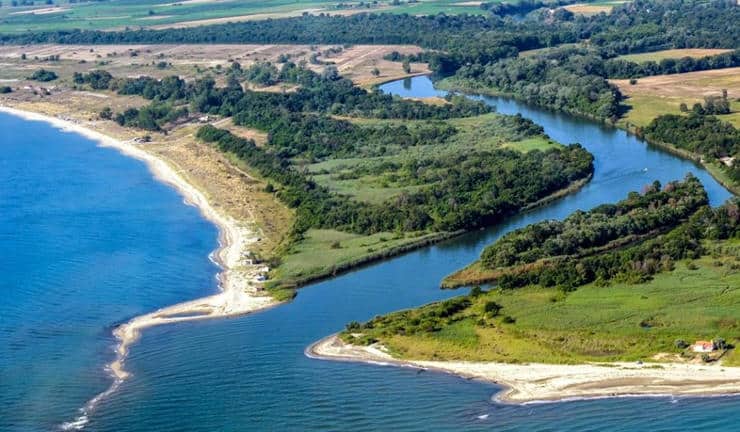 Near the settlements, Omolio and Paleopirgos, lies the Pinios River Estuary which is a wetland that plays an important role in preserving
biodiversity and maintaining ecological balance.

The plain of Pinios River Estuary River created by alluvial action Pinios after geological fault between the mountain range of Olympus and Kissavos
(Ossa) where the waters of Thessaly lake found an outlet to the sea. This resulted in the creation of the Thessaly plain. According to recent data of
newer archaeological research in Thessaly (1957-1959) by the archaeologist Miloisits and others, the area was inhabited since the Paleolithic era. The
existence of primitive Palaeolithic culture before 30000-100000 or 250,000 years, evidenced by stone tools found there. In the section of the mouth of
the Pinios (eastern and northern Thessaly) inhabited by Pelasgians (Aeolians) and then on the slopes of Olympus and Ossa, both sides of the mouth of
the Pinios river, the Dorians settled.

Today, Delta has all the physical – biological characteristics, to include the areas apply the system of protection of international conventions. It is
described as a Landscape of Outstanding Natural Beauty. Internationally belongs to the Important Bird Areas after the area observed 226 bird species
belonging to more than 50 genera. But the freshwater fish fauna of the river and the sea area is rich in populations and species.